The Day I Became a Doctor..

Ok, this entry would be my first ever entry since I became a doctor. hukhuk.. (clear throat). ;p and probably my last entry to tell about my medical school life (Probably, but not certainly). So if you are boring to read this kind of article in my blog, don't worry because this gona be the last one I suppose.

As I said just now, I've already completed my studies and has already become a doctor. The last exam that I did was Paediatrics, and I bet you it was really tough to study. I found it really hard. Plus time constraint. Two weeks before my exam, I had to go to Poland (as I said in my previous entry). And by that time, I still had lots more to study.

The night before the exam, I could hardly sleep after the Fajr prayer. (Here, the Fajr prayer is around 2.10am). Some people told me that last year, most people failed this exam and that made my feeling even worse.

For those who do not know the system here, here, for our final examination, we had to be examined orally. There were 5 professors who would sit in front of us and examine us. Before the exam, we were given a list of topics that need to study and during the exam, we had to pick several topics to discuss, but the professors could ask anything that they would like to hear from us.

During the exam day, I was among the earliest who came to the department. There were altogether 18 people to be examined, and I was the 4th person who came into the room.

Then it came to the moment where I needed to pick up my topics. I had several topics that I really really wish I would not get during the exam. But Allah wills, it happened that during the exam day, I got one of those few topics that I really really really didn't want to get!! The topic that I got was broad, and could be related to lots of questions. I felt like a bit down at the beginning. And to make my feeling worse, as I was preparing inside the room, I could listen the 3 people who came before me being examined. They all had easy topics, but gosh, the professors asked dozens of questions. Just imagine how i feels when you got topics that you didn't want to get, and the people before you who got easy topics were asked lots of questions.

Then it was my turn. I just kept myself calm. In my heart I just 'tawakkal' to Allah for whatever questions that are going to be asked. But subhanallah. Subhanallah, the professors just asked me few questions. I think they just asked about 4 or 5 questions during the half-and-hour examination! And those few questions that they asked were all easy for me I think. I was surprised! I was expecting to get dozens of questions, since the topics that I got were broad, but subhanallah, all the professors were satisfied with my presentation.

And after my presentation, before the professors let me go out of the room, the chief examiner told me 'I think you are excellent'. And that words really gave my heart a big relief.

Usually we had to wait several hours until we got to know our result. And as I was waiting with my friends outside the examination room for about 45 minutes, another professor came out of the examination room and out of all the students who were there, she came to me alone, saying that 'You were excellent'. And everyone else there looked at me (lolz). And after two professors had said like that, I felt really relieved. Out of all the 5 final examinations that I needed to take, this one was the only one which the examiner said like that to me before the official result was released.

Subhanallah, I really thank to Allah for turning the examination which I expected to be really tough into the one which really looked easy afterall.

And after that, I just went out of the Paediatric department, wandering around the hospital while waiting for the result. And I didn't feel anxious at all. Alhamdulillah.

And that's it. That's the moment where I ended my medical school and became a doctor.

And as I said just now, this probably would be my last entry in this blog to tell about my medical school life.

Trust me, I'm a doctor. hahaha. 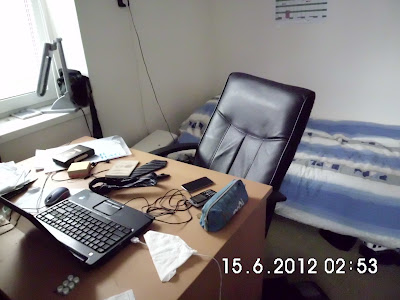 Alhamdulillah..may Allah always bless on u..
Good luck for ur future challenge..

I'm interested to study medicine in Czech Republic. Which med schools do you think is probably the best in terms of rate, facilities and environment? So far I'm considering Charles University of Prague. Plus how do you apply for scholarship? I've just finished my A-Levels and do you happen to know what is the min entry requirement for Charles Uni?

sorry for d late reply.. it has been so long time i never update my blog..

i supposed by this time u've already got your answers... anyway, just to aswer your question, for me, charles university is a very good university.. it's modern n has very good hospitals.. its just that maybe it lacks hands-on practical training if u compared to malaysia..